Pete Phillips – Volunteer of the Year 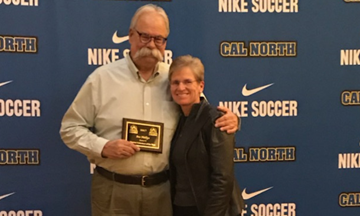 Pete has been volunteering in youth soccer for Cal North since 1988 when he became a coach for his kids, and has coached at the recreational, select and competitive levels. Once his kids aged out, he started over with a U6 team and today, 30 years later, he is STILL coaching a team.

Pete has been involved heavily in the soccer community, holding multiple positions over multiple decades. He has worked tirelessly both on and off the field promoting soccer, encouraging kids to play and providing a safe fun environment for them in which to do it. He is the epitome of what all administrators look for in a volunteer.